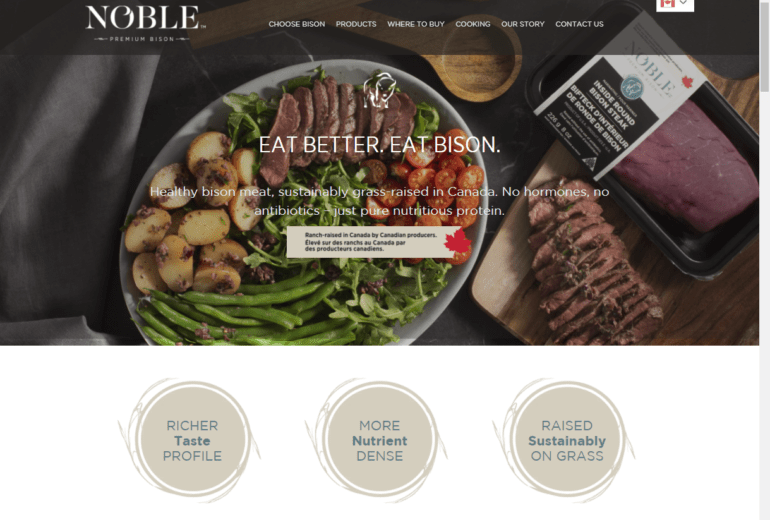 Cornerstone is pleased to announce the release of a new website for Noble Premium Bison. Cornerstone redeveloped Noble’s site so that it would serve multiple markets, both abroad and locally.

The new site combined the two previous sites (.ca and .eu sites) and combined them into a single .com site with country specific sites available in sub directories (e.g. /fr, /de, /es, /it, and /sv). We also made use of Artificial Intelligence driven translation in order to translate the site into a number of different languages (10 at last count, including French, German, Spanish, Italian, and Swedish). By making the site available in local languages in country specific sub directories, it has been very good for search engine optimization in each of those countries, achieving top rankings and increasing the overall visibility of the site (as the .eu site was getting very limited traction).

In addition, we also implemented a hyperlocal strategy as well, by building out a “Where to Buy” function which lists all retail locations across Canada where consumers can purchase their products. This has greatly increased the visibility of the site locally as the site now ranks for searches in all of the locations their products are available in (e.g. “buy bison in Toronto”, “where to buy bison in Calgary”, and “bison Yellowknife”). The Where to Buy function also provides a map interface, which makes it easy for users to identify which location(s) are nearest to them.

The site is built in WordPress, allowing the Noble Premium Bison staff to easily update the site as needed.

Check it out for yourself!
https://noblepremiumbison.com/